What you can visit here has greatly evolved yet also has its own history. It starts with the personal initiative in 1992 of a recently elected municipal councilor who was sensitive to the chapel’s charm.
He traced its owners (the descendants of the family who bought the site in 1905) and offered to purchase it for one symbolic franc. The plan proceeded but did not get very far as the rest of the councilors were preoccupied with other priorities.

Without any maintenance the roof collapsed six years later in 1998.
The municipality (the owner), was then obliged to secure the site. The first idea was to “use a bulldozer and there will be nothing more to say!" An estimate was done, followed by a request for local government assistance but the aid was granted for restoration, not for destruction.

Thus in 1999 the tops of the walls were secured and a roof was built over the choir.
Michel Andolfatto, mayor at the time, knowing the general indifference of the Castelneuvois towards their history, suggested the association did minimal maintenance so "the Castelneuvois did not feel that this expenditure was wasted".
After this phase of maintaining the building infrastructure came a period of restoration. 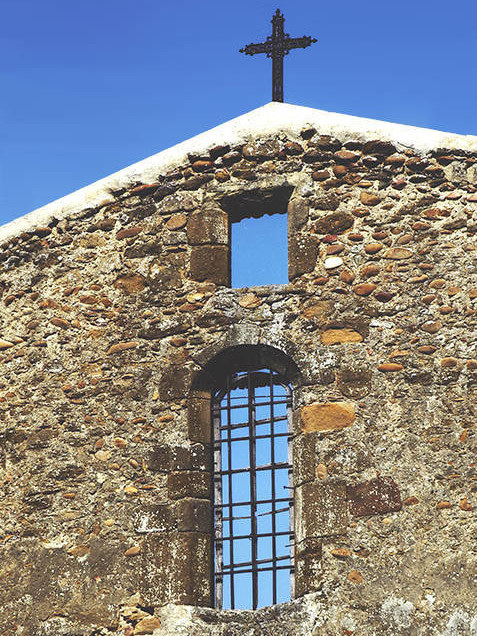 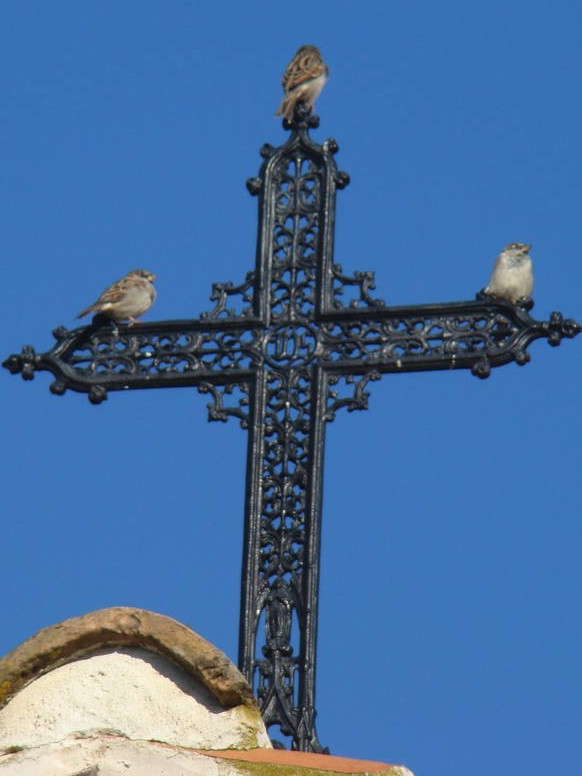 In agreement with the municipality, we believe that investing in a site to save it is reasonable only if the site is used.
It is for this purpose that we organize various shows and exhibitions.
The municipality understood this aspect of things. In 2005 it launched a study of the restoration of the entire site and how it could be used as a cultural center. The study which was directed by Manuelle Veran-Hery, a heritage architect, remains the point of reference for current restorations.

2005 also presented an extraordinary and unexpected opportunity. European Union, via a “GAL leader+” scheme, proposed funding for municipal projects using traditional local materials including chestnuts.
Despite the very short time, we managed to create plans within three days with a quotation from a local carpenter and on the last day the project was filed in the GAL leader’s office.
Three months later the institution gave €45,000 to put chestnut roofs on all the buildings.
It was this funding which unleashed the will of the Municipality. The repairs were completed 18 months later. 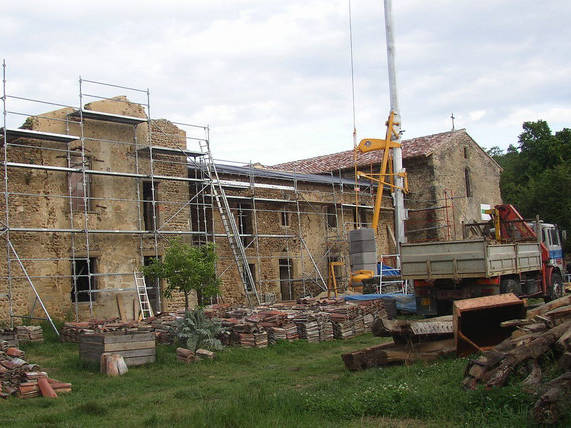 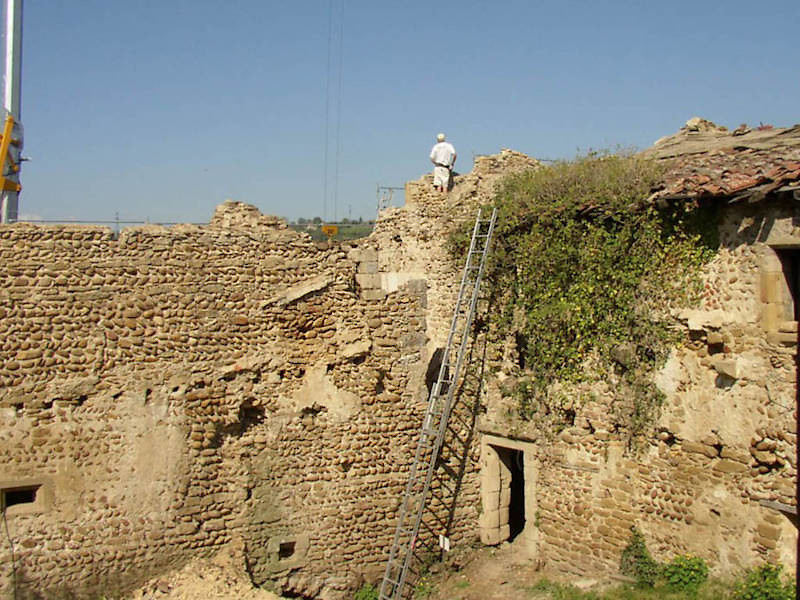 Then, under the leadership of the new mayor, Alain Mabilon, the finishing touches were put to the chapel. Its bays and buttresses were restored, stained glass was installed and toilets were created.
For this, the municipality provided most of the financing, the rest came from grants from local and regional departments and some private resources: 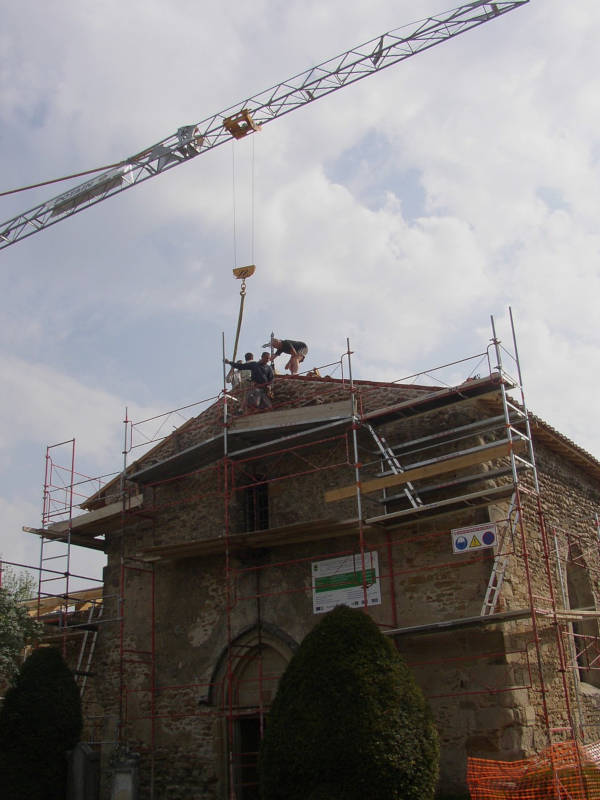 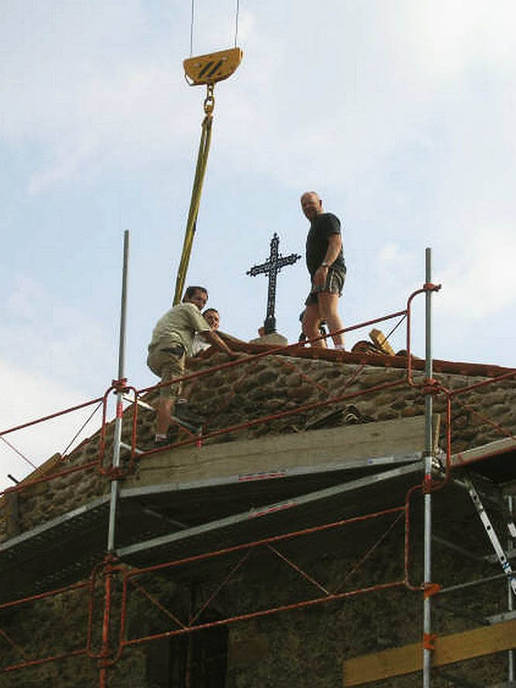 These volunteers, in fact, have had and still have an important role in the restoration.
They contribute much through their support and local knowledge, financial assistance and actions (gardening, cleaning, maintenance, business, entertainment ...).
The following achievements are important: cleaning of all sites, the West well renovation, the East well roof, repairs to the corridor ceiling, organization of the gardens, equipment for visits, daily maintenance, running activities for youth camps, schools and scouts ...
Today the surroundings are admired by everybody. It is obvious today that this contribution gives a significant boost to the restoration. 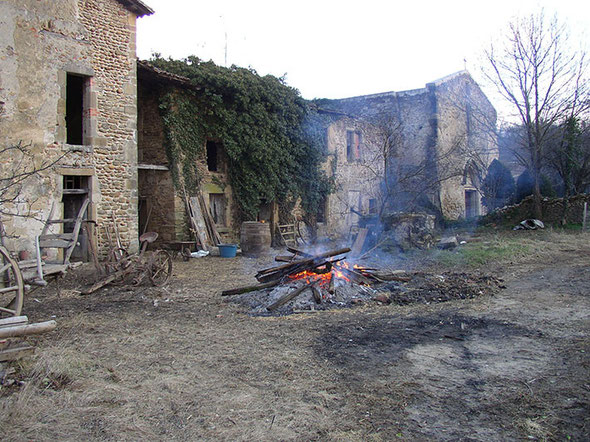 After the important rehabilitation work of the surrounding area, we must showcase its pleasant and natural aspects. Horticulture flourished around the monastery buildings. Many plants and fruit trees such as plum or fig trees adorn the court where the monastery well was installed during medieval times. There is a great variety of plants which were cultivataed there, such as the acanthus whose leaves were the model for decorating the capitals of the columns of our ancient buildings ! 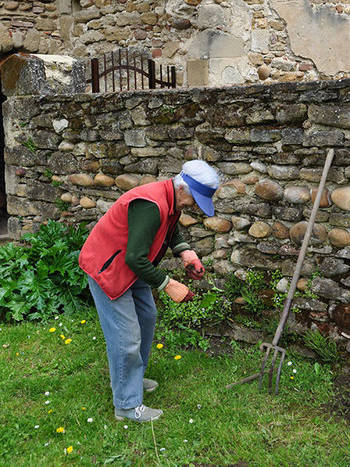